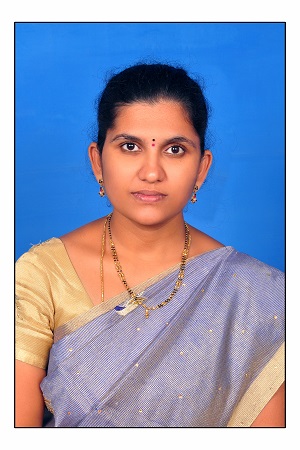 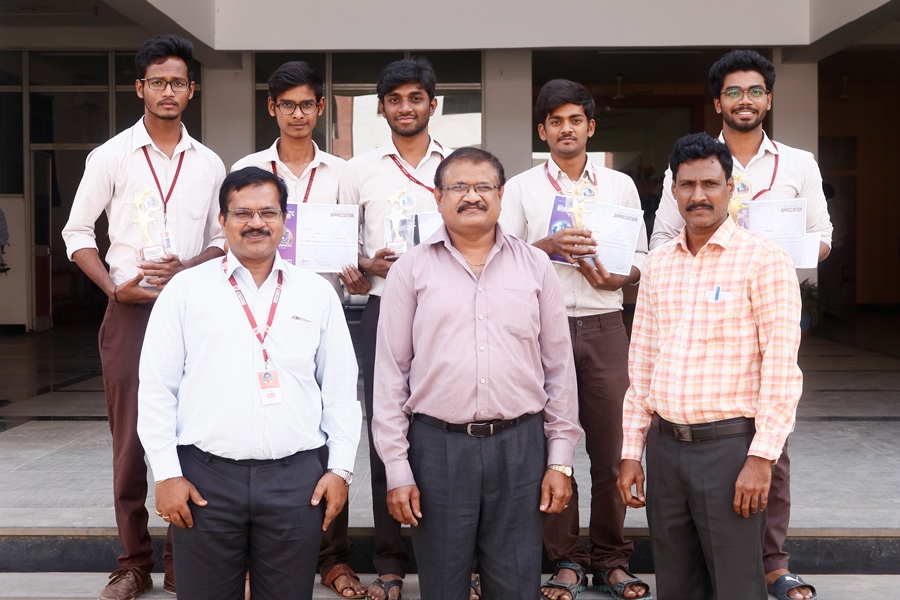 Mr.M.Pravin, Mr.M.Arvind, Mr.R.Krsiha Vamsi of CSE and Mr.M.Pavan, Mr. M.Surya Prakash of Civil Engineering Department were participated with a title of Fantastic-5, for the Western Dance Group Competition and won the First Prize among the other 25 groups participated from all over the Telugu States.

VVIT gets Distinct Recognition from NPTEL 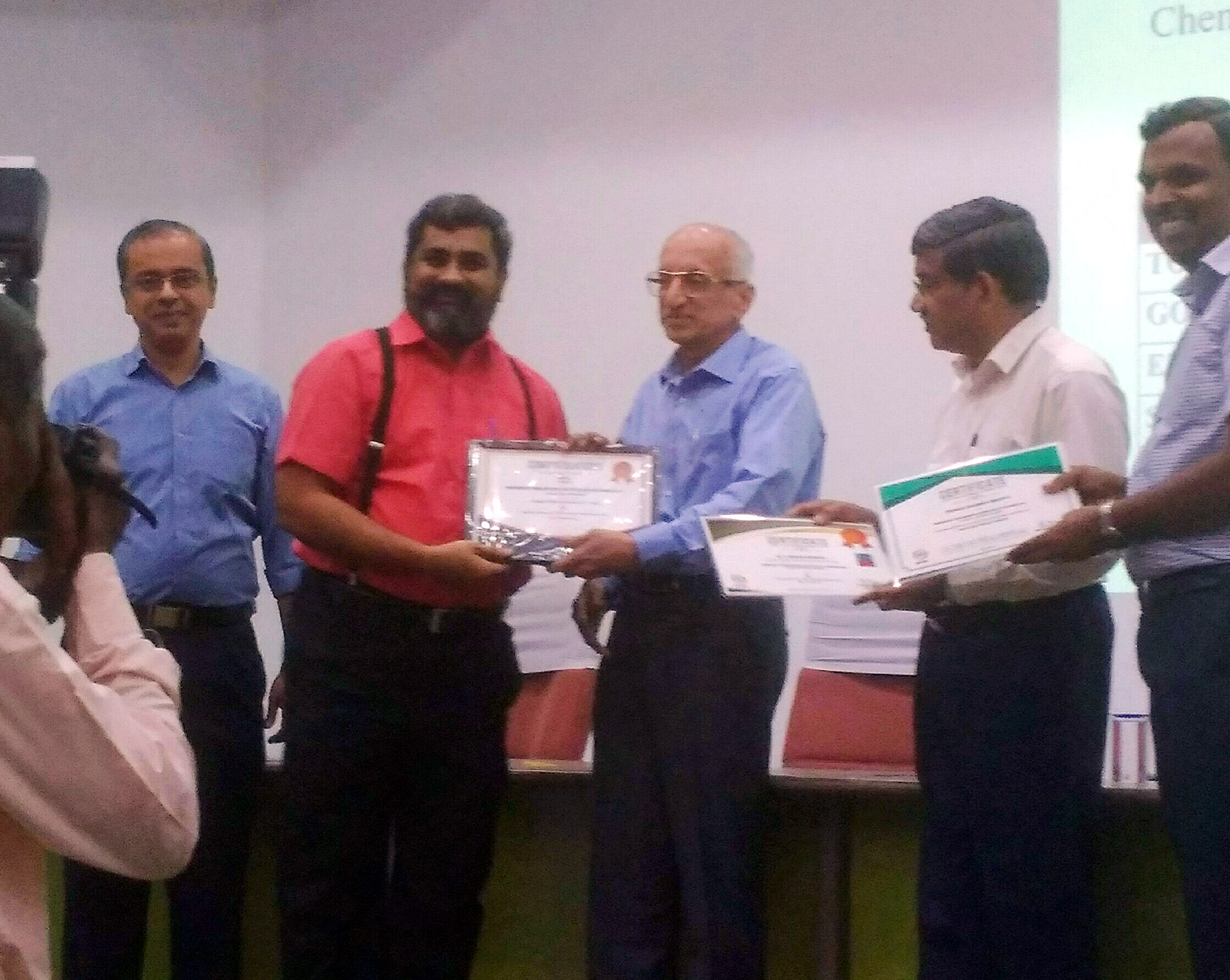 With over 1300 local chapters in colleges all over India, National Programme on Technology Enhanced Learning (NPTEL) is the largest non-profit organization offering online courses to students and faculty to improve the standards of technical education. NPTEL, an initiative of MHRD, Government of India in association with IISc and IITs rolls out courses designed and developed by eminent Professors online. The courses are designed to bridge the industry-institute gap and improve the teaching-learning process with outcome based education in colleges.

The department of Science & Technology under the Ministry of Science and Technology, Government of India sanctioned a grant of Rs 60 Lakh for the strengthening of the Laboratories in VVIT. This amount is sanctioned under the Fund for Improvement of Science & Technology Infrastructure in Universities and Higher Educational Institutions (FIST) Program – 2017 ( FIST programme) of the Department of Science and Technology. Vasireddy Venkatadri Institute of Technology earned the distinction of becoming the youngest College in entire India to have received the grant of Rs 60 Lakh under the FIST – 2017 Programme as informed by the sources. The Chairman of the College Mr Vasireddy Vidya Sagar congratulated the Principal and the heads of the departments of ECE, CSE and Civil Engineering for attaining this distinction. “The funds will be utilized to build highly sophisticated labs for conducting research. These labs when installed will be used to conduct research that can develop cost effective innovative solutions which are a need of the society,” said the chairman. He said the students can enjoy the benefit of these labs in acquiring the highly needed skills.

The National Board of Accreditation (NBA) has accorded accreditation to three engineering braches of VVIT, Nambur. Electrical & Electronics Engineering, Mechanical Engineering and Computer Science & Engineering branches have received accreditation yesterday, 19-01-2018 in an official intimation received from NBA. The recognition was granted after an inspection by a committee of the NBA Team in December 2017. VVIT has Electronics and Communication Engineering, Information Technology branches already accredited by NBA on 2016, and with this latest accreditation, a total of 5 branches strengthened VVIT’s prestige. VVIT is proud to announce that it is one among the very few prestigious institutes in both Telugu States, which got this kind of rear achievement of having been accredited by NBA for 5 branches, with in 10 years since its inception. 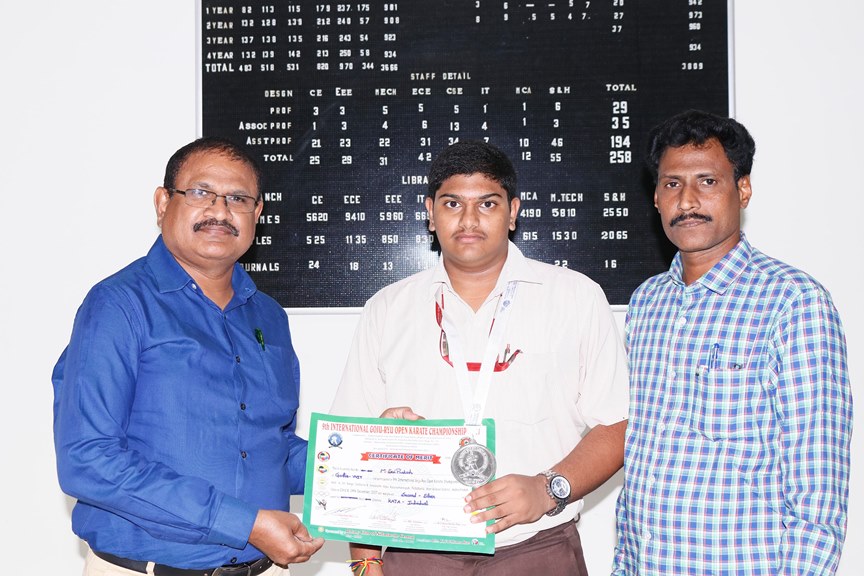 Pathan Tasneema Khan, a B.Tech passed out student of IT Department won the "JNTUK Gold Medal" for her excellent academic performance for the batch of 2012-16. She scored a staggering 83.24%. Tasneema is not only a brilliant performer in the academics but she is also active in the extra-curricular activities. After completing her B.Tech, she is presently working with CAP GEMINI. Tasneema will receive her Gold Medal in the University Convovation to be held soon for the 2016 passed out students.

He is placed in Deutsche Bank Singapore with an annual pay of 9.5 lakhs. This is the highest pay achieved by a VVITIAN for the academic year 2017-18. Mahindra Gangineni thanked his faculty members of Information Technology department for their continous monitoring and support offered. He extended his thanks to the Training and Placement Cell for the training programs arranged and support throughout.

Its time to appreciate the young talents of our college. Mohammed Raiyyan of IInd CSE bagged the "Blogger Recognition award" for his blog. You can visit his bloghere 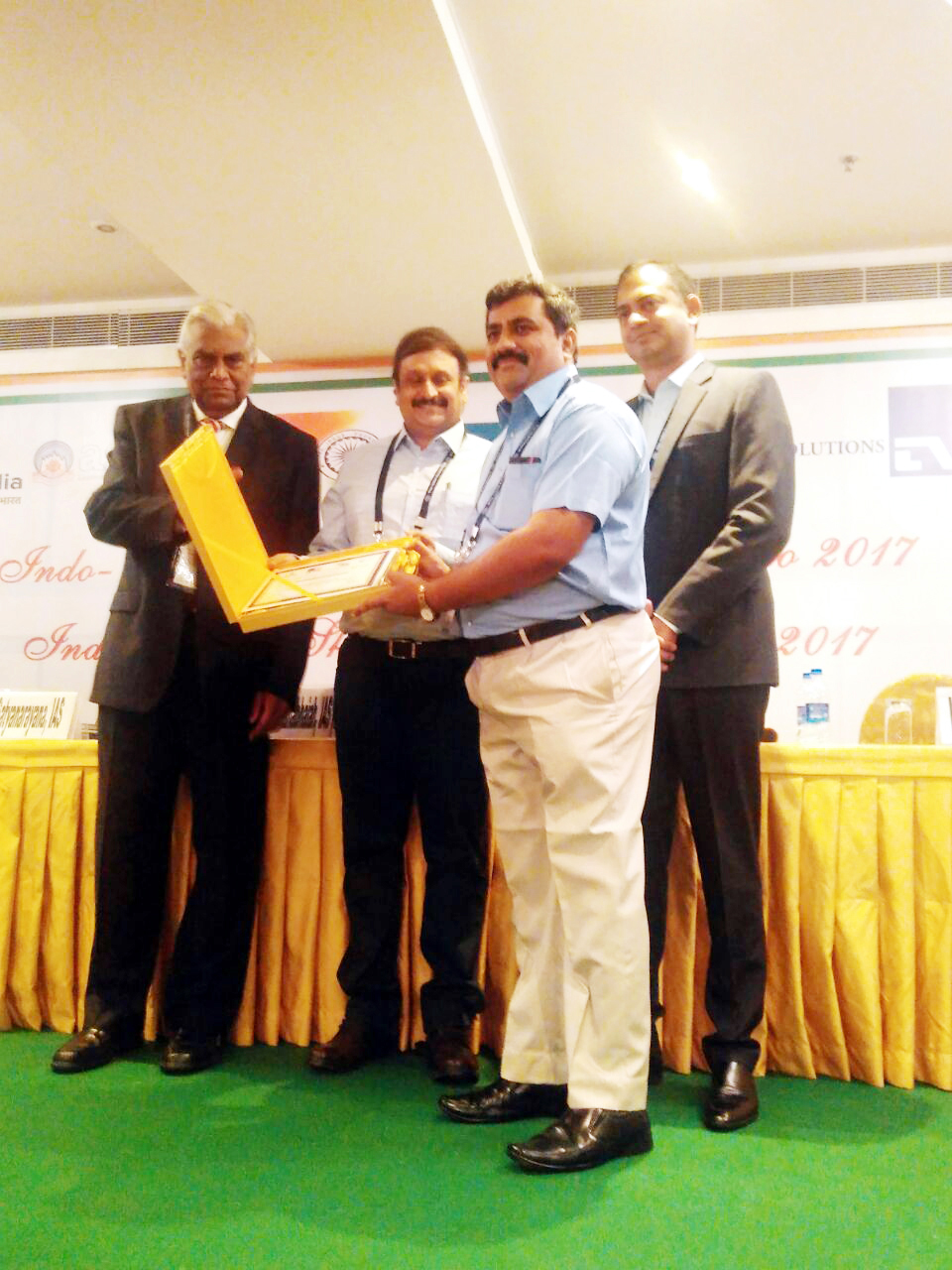 Vasireddy Venkatadri Institute of Technology, Electronics & Communications Engineering Professor, Dr.M.Y.Bhanu Murthy, got the “Award of Excellence in Teaching” today, from the Indo-Global Educational Summit & Expo, running at Taj Deccan Hotel in Hyderabad. In this regard Chairman of VVIT, Sri Vasireddy Vidya Sagar, congratulated Prof. M.Y.Bhanu Murthy on his achievement.

Prof.Bhanu Murthy, while talking to the press informed that he is very happy with the award and thanked the organizers of Indo-Global Summit & Expo for selecting him out of many nominations invited from all over India after a thorough scrutiny. He specially thanked the Dr.Padmanabhaiah, IAS and Sri K.V.Satyanarayana(IAS), CEO, APSSDC and Sri Bharath Anumolu, Indus Foundation, USA. Awards in different categories were also given to deserving candidates selected from across all over the India. Prof.Bhanumurthy, loyally stated that the support of APSSDC Center of Excellence at VVIT morally helped him in achieving this award. 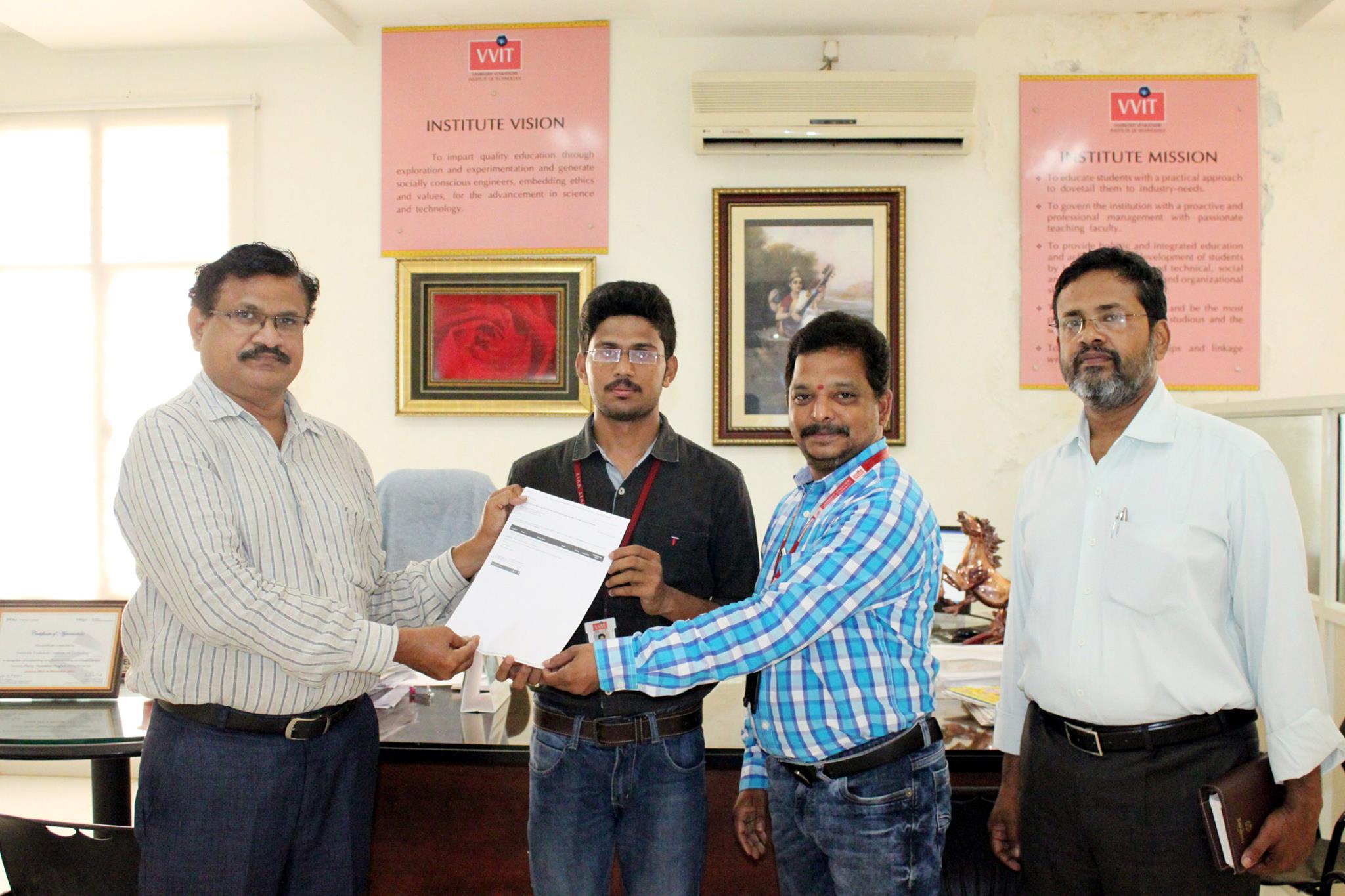 Alapati Sai Akhil, a fourth B.Tech Computer Science and Engineering student from our VVIT, has been selected by Samsung for a Research and Development position with an annual salary package of Rs 7.5 lacs, for its Bangalore facility.

Samsung R&D Bangalore (SRI-B) is the largest Overseas R&D Centre of Samsung Electronics. Founded in 1996, SRI-B has grown to be a significant contributor to the cutting edge products and services of Samsung. SRI-B is a key player in the breakthrough innovation and success story of Samsung Electronics. Our engineers conceptualize and commercialize novel features, designs, products and services that differentiate Samsung as a market leader and deliver world-class products. 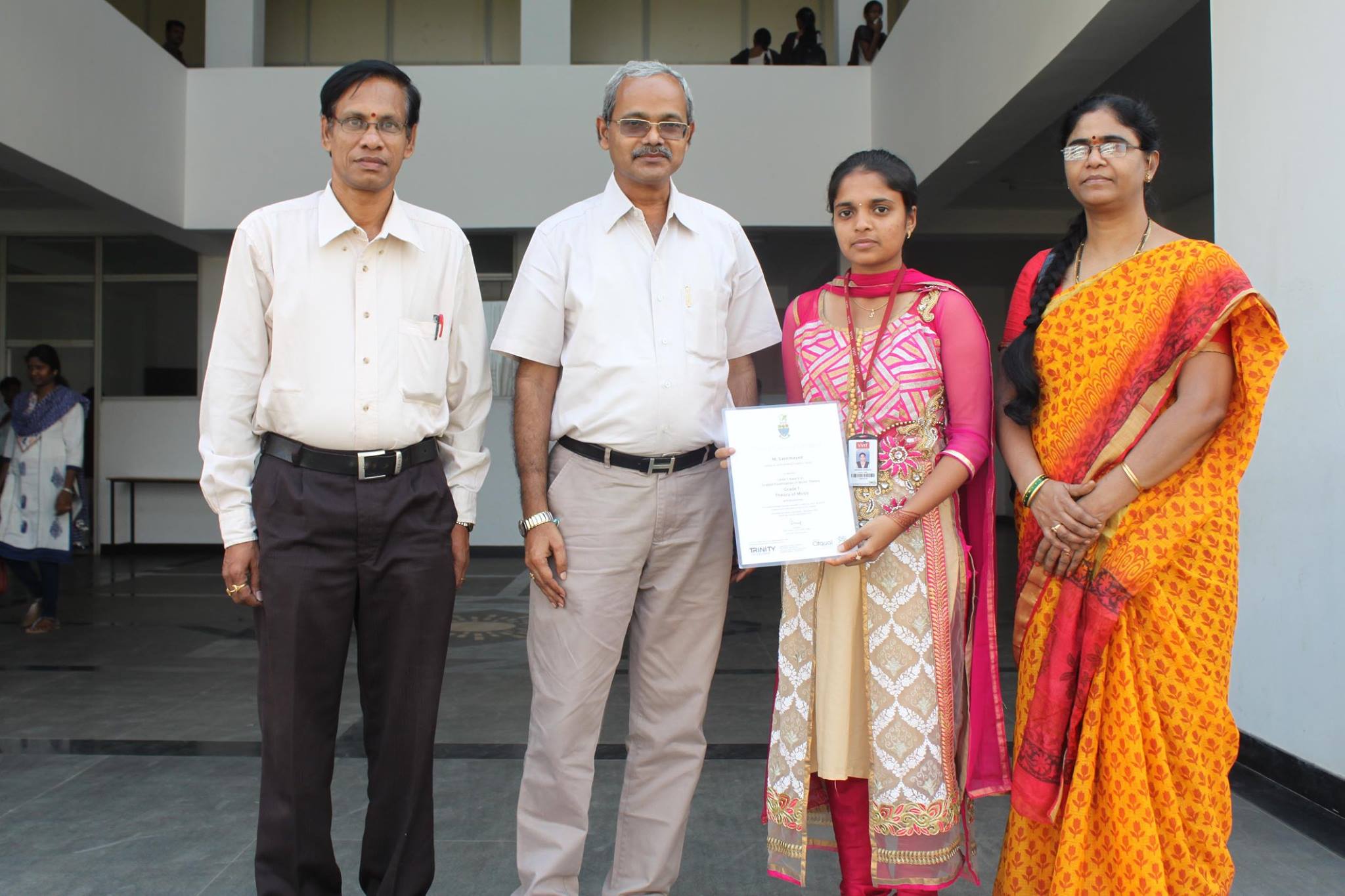 Modukuri Sasirmayee, got Distinction in 'Western Music' exam conducted by Trinity College of London. She is also an active member of Theatre Club, VVIT. She played crucial roles in the drama competitions in which her home department won best drama for two consecutive years. 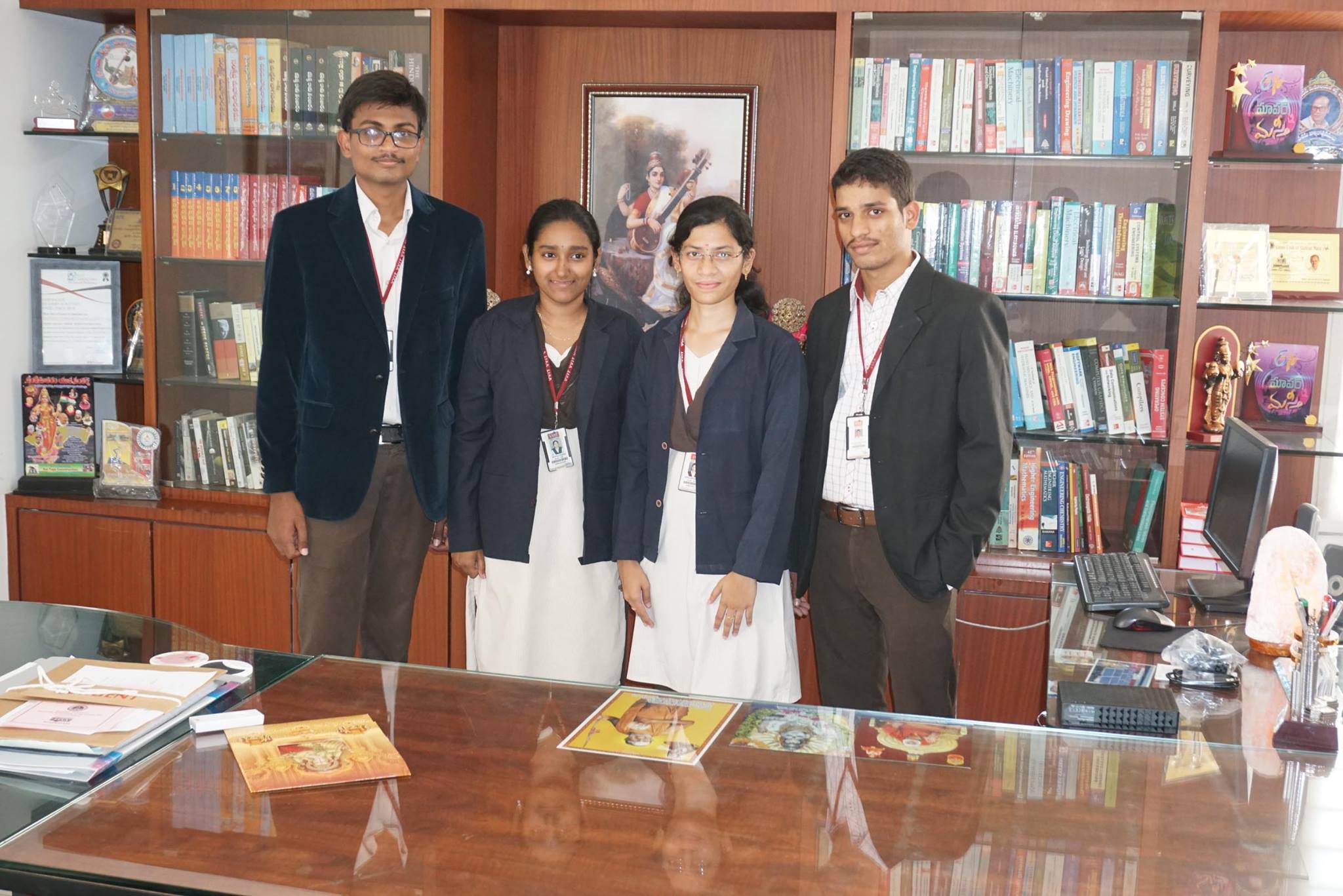 The University Innovation Fellows program empowers students to become agents of change at their schools. The Fellows are a national community of students leading a movement to ensure that all students gain the necessary attitudes, skills and knowledge required to compete in the economy of the future. These student leaders from schools around the country create new opportunities that help their peers develop an entrepreneurial mindset, build creative confidence, seize opportunities, define problems and address global challenges.

The University Innovation Fellows is a program of Stanford University’s Hasso Plattner Institute of Design (d.school). The program was created as part of the National Center for Engineering Pathways to Innovation (Epicenter), a five-year National Science Foundation grant. 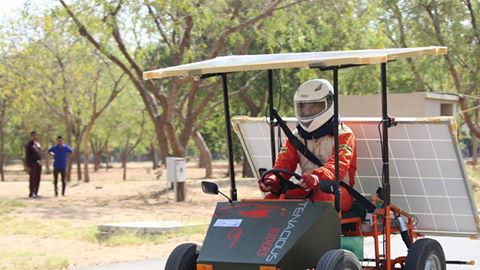 The students of II and III year Mechanical made us proud by standing 5th in the National Level "Solar Vehicle Challenge" held at Ganpat University, Ahmedabad between 20th and 24th of March, 2017. They have cleared all rounds in the competition. Though they stood fifth, this valiant effort motivated many more students in the college. 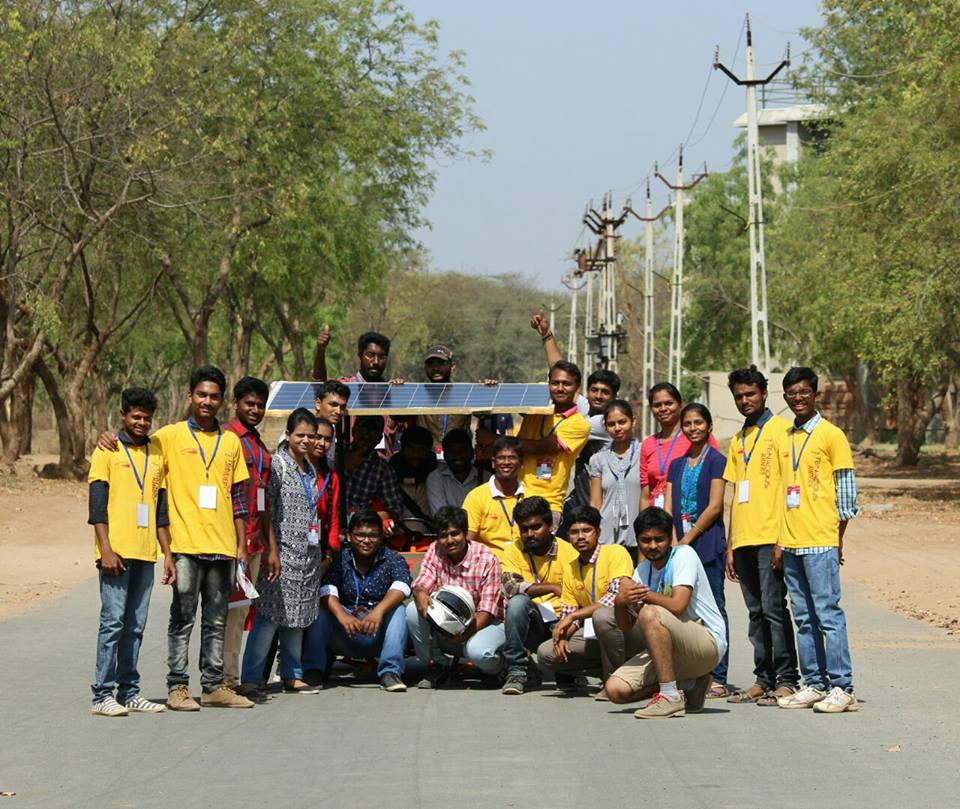