Subedar Major Yogendra Singh Yadav , PVC,  the  Junior Commissioned Officer (JCO) of the Indian Army, who was awarded the highest Indian military honour, the Param Vir Chakra, for his 4th  July 1999 action during the Kargil War visited Vasireddy Venkatadri Institute of Technology today i.e  28.07.2018 and enlightened the VVIT students  at the Open Auditorium on  the  commemoration of  Kargil Divas Day. 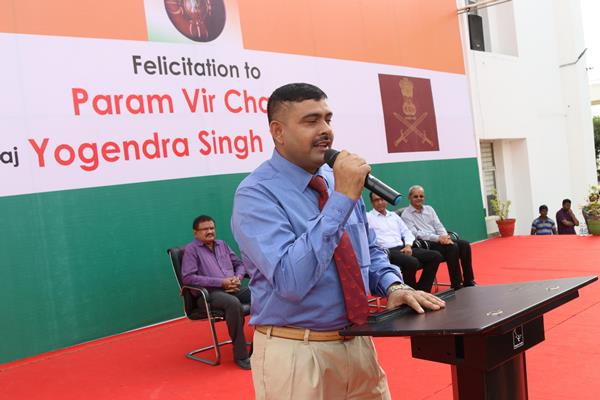 Col. GVP Sai Sankar, Command Officer, 10(A) Girls Bn and Sri. Md. Hussain, Immigration Inspector, Gannavaram Air Port were the other delegates who shared the dais with the highest decorated personality in the Indian Army. The guests were welcomed by giving a Guard of Honour under the leadership of Lieutenant. Sd. Beeban Basha 2(A) Armed. Squadron, Lieutenant. Dr. A. Srivani ,10(A) Girls Bn, VVIT NCC Cadets of both Boys and Girls wing along with the Higher Officials of VVIT.

On this occasion, Dr. Y. Mallikarjuna Reddy, Principal addressed the dignitaries and expressed that every engineer should be inspired by Subedar Major Yogendra Singh Yadav , PVC and  must reach greater heights in their career. “Education is not only vital but Discipline plays a pivotal role in student’s life, he added.

Sri Sagar, Chairman, stated that the visit of the Subedar Major Yogendra Singh Yadav, PVC; Col. GVP Sai Sankar, Command Officer, 10(A) Girls Bn  and Sri. Md. Hussain, Inspector, Gannavaram Air Port   will be a memorable moment.  He emphasized that students should get inspiration from the brave deeds done by the Indian Heroes. He also briefed t the role of discipline in student life. He underlined that VVIT is proud to have both Boys and Girls Battalions with excellent achievements every year. 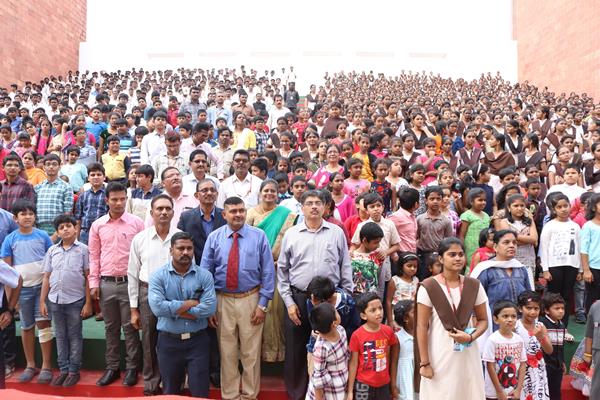 Col. GVP Sai Sankar, Command Officer, 10(A) Girls Bn enlightened the students by stressing the need of joining in military services. He informed about several opportunities for NCC Cadets in the Indian Army. He expressed his elation for the endeavour being put by the VVIT Management and steering the Battalions successfully with two Lieutenants.

Sri. Md. Hussain, Inspector, Gannavaram Air Port lauded  the Subedar Major Yogendra Singh Yadav, PVC’s dedication and punctuality in Indian Army. His name always will  be remembered by all the soldiers who are serving with sleepless nights at the border. His service is a saga in the milestones of Indian Army, he added.

Subedar Major Yogendra Singh Yadav, PVC elated by the grand welcome and activities of VVIT NCC UNIT and wished for the best output in the near future. He also highlighted the numerous opportunities available in the field of Indian Army. He recollected his joining in the Indian Army at a very young age of 16 years. “Bravery is how well you hide your fears. Even when death is definite while facing enemy, personal safety is the last on a soldier's mind and security of the nation and its citizens remains central”, Kargil War hero and Param Vir Chakra Awardee Y S Yadav said.

He also recollected his experience at the time of Kargil War and how he was wounded.  He said that “the training in Defence will develop teamwork, self-confidence and commitment which will help them to shape the best career.” He appreciated the commitment of the Management of VVIT for encouraging NCC activities in a well prepared manner in the campus.