An Awareness Program on "Anti-Ragging"

an anti-drug awareness program was conducted  in the institute today under the aegis of its Social Awareness and Yoga Club and Anti-Ragging Cell.

Dr.Revuri  Harikrishna, MD, General Medicine, Sravani Hospitals, Guntur, a renowned doctor was invited as a chief guest for creating an awareness on the ill-effects of drug and alcohol consumption, in a comprehensive manner.Dr. Revuri in his motivational speech, informed that every day India sees 10 suicides related to drug abuse. He also added that a report by the central government demonstrated that the vast majority of youth are receiving drug and alcohol prevention messages from sources such as TV, radio, posters and pamphlets, Movie ads and campaigns as this. Furthermore, the report on its special analysis showed that those who have been exposed to such messages are significantly less likely to abuse drugs. 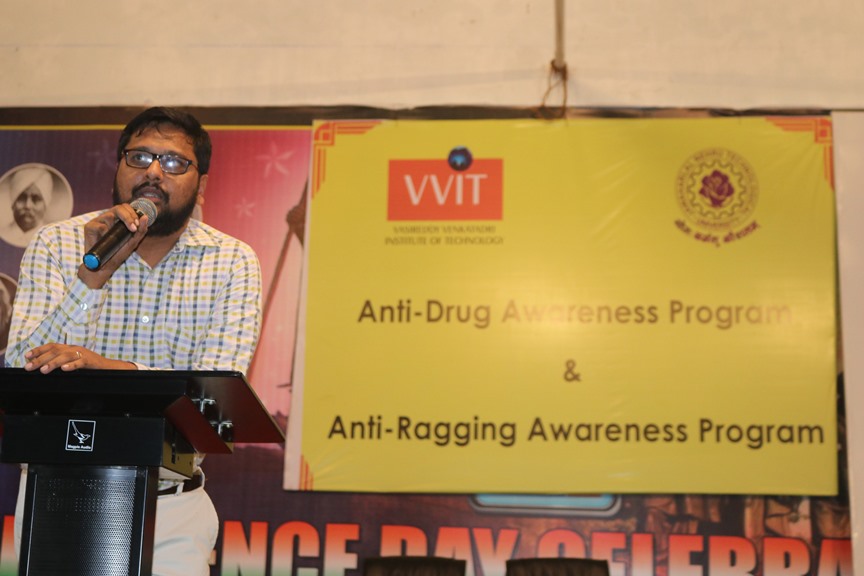 The Government of India is taking every visible effort to prevent teen drug use via the National Youth Anti-Drug Media Campaign, especially for those making the difficult transition from schools to colleges via their National-level Anti-Drug Policies.

Citing a close to heart incident from his college days, Chairman Sri Sagar of VVIT, expressed the view that it is often the overconfidence of the parents in their  child’s behavior, leads to ignoring or neglecting the  behavioral changes that may result in irreparable damage to the personality or even loss of life of the victim. He even said that substance dependency and drug abuse leads to criminal behavior and reckless life style in the youth.

Participants opined that a few campaigns must also be conducted for the parents, encouraging them to talk to their children about drugs, and monitor their behaviors, a well-counseling skill for reducing the drug usage by their wards.

Principal Dr.Y.Mallikarjuna Reddy of VVIT, in this event stated that  youth are the largest force of our nation and it must be directed in a positive way for their happy, healthy and holy living. Dr.Reddy expressed that youth only can save themselves by conducting large number of events campaigning the anti-drug messages to make a significant impact in the society.  He said Government of AP is taking all necessary measures about bringing awareness in to the public via TV, radio, posters, pamphlets and movies advertises on anti- alcohol and drug prevention messages in the past 2 years rigorously.

Sri Sagar, Chairman of VVIT, emphasized that it’s crucial that our youth must receive clear, consistent and credible messages about the ill-effects of drugs. He also advised all the parents to put necessary vigilant efforts to keep their children healthy and drug-free time to time. He opined that this kind of campaigns in more number must be conducted frequently for making the youth move into the right direction.

Sri Sagar , Chairman of VVIT along with other management members felicitated the Chief Guest Dr. Revuri for his motivational speech on the Ill Effects of Drug Abuse.